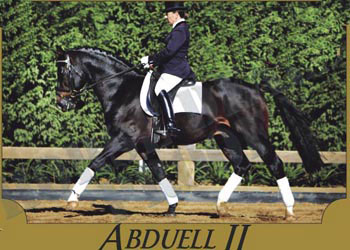 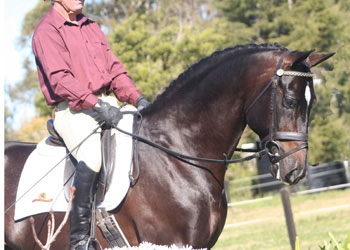 Abduell II is by Abduell, a horse campaigned by John ten years ago and winner of many events at Advanced level, including Queensland 3DE Championships.

Abduell II is a registered Warmblood stallion and is available for service. He is a beautiful type with an exceptional head and neck, and a lovely temperament. Until he came to Falcon Park he spent most of his life as a working stallion, however when he came to us 2005 we began campaigning him in dressage. Since then he has competed regularly, winning several Championships and rarely out of the placings.

2017 – Abduell II was put to sleep. He was a grand old chap but had a recurring injury which was hampering his quality of life. 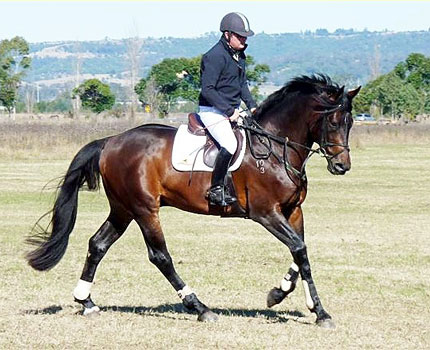 ‘Southern Son’ is a recent winner at Prix St George /Inter 1 dressage  level,with great scores.He has competed successfully at Grand Prix  showjumping and is unbeaten in the 4 six bars  he has competed in. His temperament is exceptional, he is a delight to ride, handle and own. ‘Southern Son’ is  stunning individual and is passing on his gorgeous looks and wonderful temperament to his offspring.”

Southern Son is a beautiful stallion who is  showing immense talent in showjumping and dressage. His Sire Premier des Hayettes is a World Cup Winner and one of the best bred and most successful jumping stallions in Australia.

His dam Cracklin Rosie, has produced some very successful horses including Eliza Jane campaigned by Vicki Roycroft at World Cup level, EP Smooth who is doing well in dressage and Strawberry Girl who is regularly in the winners circle in showjumping competitions. 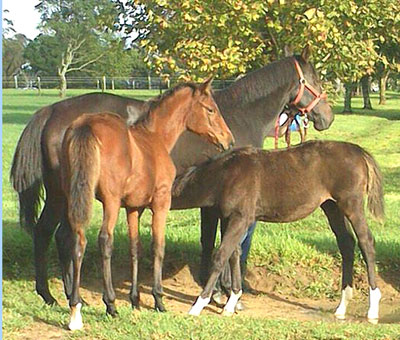 Sadly things don’t always go to plan and we had to have Hollywood, the brown foal’s Mum put down. She had an inoperable tumour in her nose, which was growing and inhibiting her breathing.

It is always difficult when you lose a mare who has a foal at foot. But it has been amazing – here she is with our gorgeous mare ‘Grace’ who is letting her drink! Grace is Mum of the bay filly….. now she is looking after her best friend’s baby…… after a sad week, seeing this makes my heart sing. Pip